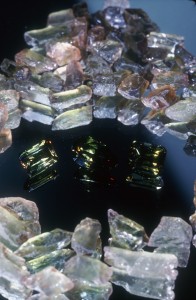 Andalusite is strange and beautiful and really quite hard to find in larger sizes. Andalusite is notable for a very strong pleochroism with a different color associated with each of 3 different crystal axes. Note the different colors in the gems in the photo. Also note the rough, uncut gems in the background.
For a number of years, years ago, we had a wholesale client who was anxious to buy all the larger sizes of Andalusite we could supply. His demand lasted quite a while. What a wild around the world chase he started. That first year on a trip to Sri Lanka we found one very beautiful Andalusite cut gem that was very large at over ten carats. And then—no more Andalusite in Sri Lanka on subsequent trips.
Later that year on a trip to Brazil we encountered a fellow that had some rough Andalusite. He wasn’t officially in the gem business but his main business took him by some Andalusite mines in the state of Espiritu Santo. These mines were worked as side businesses by coffee growers. Their coffee plantations were very remote and nobody visited the growers and the growers didn’t visit anybody—except for Valdomir. Valdomir sold chemical fertilizer to the coffee growers and had to visit them regularly. He was their access to the world and the man who could bring their Andalusite to the market. For a few years back then Valdomir dominated the Andalusite business and we had an exclusive with Valdomir.
One of the best things about that quest for Andalusite was getting to know the state of Espiritu Santo. The capital of that state is Vitória. Vitória is one of the most beautiful settings you can imagine. The setting is a lot like Rio de Janeiro but without the city sprawl. There are the large inselbergs similar to Sugar Loaf and Mount Corcovado, a beautiful bay and relatively fewer people.