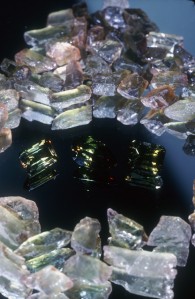 Andalusite is a rare gem found in several places in the world. Perhaps more than any other gem Andalusite really does exhibit the fall colors. Most Andalusite gems display 3 colors. The dominant three colors are yellow, green and reddish brown. Each of the three crystal axes will tend to show one of the three colors which mix and blend and generally have a fall-like riot of colors all in one gem.

In traveling around the world I have bought Andalusite in various localities including Sri-Lanka and Brazil. It also comes from Madagascar and Myanmar. Andalusite is not well known due to its rarity. Well known stones are usually found in enough quantity that they can be found in larger channels of distribution such as department stores or jewelry chains. Even when a comparatively large parcel of Andalusite is found it is nearly impossible to find a significant group of well-matched gems. Matching gems is one requirement of the larger channels of distribution—one of a kind oddities need not apply.