If you were born in October, you are lucky enough to have your choice of two very colorful birthstones: Opal and Tourmaline. This month’s blog post focuses on Opal—the “Gem of Mystery.”

Opal has perhaps the most mysterious look of any gemstone—especially fine opal. Who would guess that a “rock” from the earth could look like a miniature version of the Northern Lights? The idea of something from the earth looking so ethereal is somewhat of a contradiction. The soil we tramp over in our everyday life is so “earthy”—brown, drab, lifeless, dull, and opaque.

The fire in opal is officially called “play of color.” It wasn’t until opal had been thoroughly examined by electron microscopy that the mechanism creating play of color was understood. So, this understanding is relatively modern.

Play of color is created by the diffraction of light through microscopic spheres within opal. Very tiny differences in the spheres themselves, the way the spheres are ordered within opal and the exact nature of the material surrounding the spheres makes the difference between exotic and expensive opal and ordinary and affordable opal.

What Makes Opal So Unique?

Opal has a good excuse for being different since it is neither a true rock nor a true mineral. In techno-speak opal is an amorphous form of hydrated silicone-dioxide (SiO2·nH2O). That is to say it’s more like glass than quartz, in that it has no crystal structure. However opal goes even further in its oddity in that it is part water.

Many gems are minerals: topaz, quartz gems, garnets, ruby, sapphire and so forth. Some gems are rocks—with lapis-lazuli being the best known example. Opal is neither. 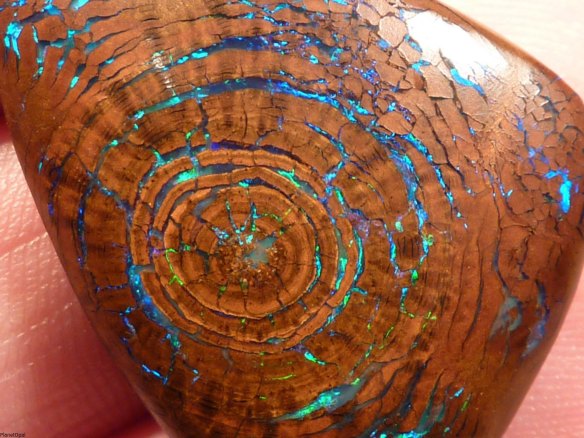 One of the most interesting facts about opal is that it can be the substance that “petrifies” certain fossils. There are examples of very fine opal in the form of petrified clamshells, tree branches (as shown above), and so forth. Now this gets into the realm of something very special for the little kid lurking inside many adults who wanted to be a paleontologist, rock hound, or jeweler sometime between ages 5-12 years. Many kids want to have all three of these occupations at some time or another. A truly fine quality opal fossil simply sparks the imagination.

How Durable is Opal? Surprisingly!

While opal is only 5 in hardness its durability belies its hardness. Certain other comparatively soft gems don’t seem to hold up as well as opal while being worn. Some other soft gems such as chrome diopside are highly friable and have cleavage planes that make them susceptible to fracture—opal doesn’t. Another advantage many opal gems have is the fact that they are cut en-cabochon. A cabochon, especially a high-domed cabochon, will tend to slip and slide when in contact with another object. On the other hand a faceted gem may not present such a slippery shape to the world, taking blows head-on so to speak. In any case opals seem to do well in jewelry. Of course, a pendant is safer for opal than is a ring.

Where in the World?

Ppal is found in many parts of the world. In fact if you include so called “common opal” which has no play of color and is neither transparent nor translucent opal is found in many places. In fact, our ancient ancestors used common opal for the creation of arrow heads. Apparently this happened in many places of the world. Opal has very similar properties to obsidian which is well known as a favorite substance from which arrowheads were fashioned.

Fast forwarding to current times and much of the world’s opal supply is known to come from Australia. Some sources place Australia as the producer of over 90% of the world’s opal. Certainly large quantities of opal also come from Piaui, Brazil and very recently Ethiopia. Centuries ago Europeans relied on opal mines in Eastern Europe in what is now known as Slovakia, the Czech Republic and Hungary. Mexico is a big supplier of nearly transparent opal both with and without play of color. There are reports of opal also coming from Indonesia, Guatemala, Nicaragua, and Honduras.

A fun aside for those of us from the USA are the opal deposits right here in our own country. The best known deposits from here in the ‘States are in Virgin Valley, Nevada. From my own personal experience this material tends to be highly hydrated and therefore should always be kept in water. It tends to dry out and crack out of water. On the other hand, Virgin Valley material can be some of the most exquisite opal in the world. As long as you are happy looking at this material inside a sealed glass container you will love and cherish this material. However, if you want something to wear other sources seem more practical. There are also deposits of opal in Idaho though not generally prolific.

To read about the other October birthstone, Tourmaline, click here >