Alexandrite is known as the color-changing gem. In the case of the Alexandrite from Nova Era Brazil the change is most often the change from the color of an Indicolite tourmaline to the color of an amethyst. In both cases the colors are attractive. Other mining locations produce color changes that are different than Nova Era. For instance years ago when traveling to Sri Lanka we saw a few pieces of very expensive Alexandrite that went from muddy brown (with a little rusty orange) to muddy green (emphasis on muddy). The change was not startling but the colors were unattractive. About 16 years ago (or so) there was a discovery of Alexandrite in India. The colors in that case are nice to look at and resemble (to a certain degree) the colors of Morganite which are: kind of peachy to kind of pink (both phases are accompanied by a little, very little tan). The Indian stones are attractive and the color change is noticeable.
One interesting thing about the color change of Alexandrite is that most films and most cameras are partially color blind to the color-change. We ran across this issue when we wrote our first book. That was back before digital cameras and we had a devil of a time getting the color at all right. We went from Kodachrome to Ektachrome to Fuji and it was all a bust. Even now the digital cameras will tend to only see the blue or green phase and not see the other. Interesting to know how much more sensitive our eyes are in comparison to cameras and films.
Alexandrite is a color variety of the mineral Chrysoberyl. Chrysoberyl is the third hardest of the commonly known gems. Chrysoberyl is a crystalline form of Beryllium-Aluminate. As you may recall Sapphire and Ruby are collectively known as corundum. Corundum is the second hardest of the commonly known gems. Corundum is pure aluminum oxide. The second and third hardest gems both have aluminum as a major ingredient. Interesting!!!

As gems have become more widely known around the world spinel has become one of the beneficiaries. Always appreciated by gem connoisseurs, spinel has been gaining ground in popularity. If there had been large finds of spinel all through the years perhaps it would have been better known. But spinel is rare. How rare? That is always difficult to measure in a fragmented world market. One measure however is that large gems like our pictured stone cost thousands of dollars per-carat. This particular specimen is over 12 carats in weight. Other more widely available gems are still available for $20.00 per-carat or even less. That is probably the best measure of spinel’s rarity. It is difficult to find in the market—in large sizes, when you want it, in the cut you want and so forth—it is in better colors and larger sizes—unobtainium.

*The word “unobtainium” has been around for a few decades. One theory as to the origin of the term has it being invented by aerospace engineers as a material they would like to use but can’t find or afford in the creation of aero planes.

Last post everybody loved the picture of the rough-uncut Morganite crystal. We decided to add in another photo of rough Morganite. This time you can see the more normal orange color that a lot of Morganite displays coming out of the ground. From certain mines the color is intense enough that cut stones show a nice color as-is. Some people like the peachy color. If you take these stones and put them out in the sun—especially a hot Brazilian sun—they will turn pink. Many people like the pink color. The pink color is stable and will not turn a different color in the sun. If a person wants to accelerate the color change from Peach to Pink all you have to do is put the stones in a kiln. Run the kiln up to about 900` and turn it off. This simply accelerates a natural process and is accepted and well known in the gem trade. 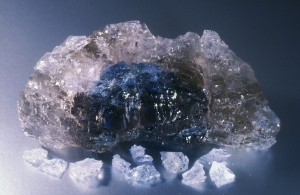 We’re making our books available for you to read—for free. Follow the links on the home page of http://www.ramseygems.com/ to our books. We are serializing the books so you can be part of the gem world right along with us. Gems can be appreciated on so many levels. Of course they are beautiful. However, there is so much natural history involved—geology, mineralogy—the very history of our planet. It’s like finding out your favorite movie star is also bright, kind, a real life hero (or heroine), a job creator and a philanthropist.

A number of our established clients know about spinel. Spinel is a relatively unknown gem. It has been unknown at least partly because it is very rare. It is chemically related to corundum (ruby/sapphire) in that spinel and corundum both have aluminum as a major component. In corundum is largely aluminum while spinel has both magnesium and aluminum in it. Due to its rarity spinel can be quite expensive. Due to a lot of writing about spinel in the last 10 years people’s awareness of spinel is greater than ever driving up spinel prices even more. Even back in the 1980’s large red spinels could reach prices in the thousands of dollars per-carat. One example of that is the gem in the photo. The gem in the photo is a little over 12 carats. That gem came through our hands back in the mid-1980’s and at the time was worth about $3,000-per-carat. You can only imagine how much it is worth now!!!
Over the past years and especially over the past decade much has been written about spinel so there is at least some awareness of the gem. When we were first in the business spinel was only known to come from Sri-Lanka and Southeast Asia—found amongst the ruby and sapphire deposits. Since that time some wonderful gems have come from East Africa and the Pamir mountains in Central Asia—a mountain range in confluence with the Himalayas.

In our recent post on Rubellite there were some follow up questions about the color of Rubellite. First of all different countries seem to have different understandings on the subject. The round stone pictured in this post may help us towards clarity. In almost any country other than the USA this stone, despite being pink, would be called Rubellite. There are country-specific perceptions regarding desirable color in gems and the names attached to them as well. Why some people would name this very pink gem a Rubellite is due to the type of tourmaline crystal that would produce this stone. Rubellite crystals tend to look different from other types of tourmaline crystals. In addition to a lighter color gem, as in this picture, a Rubellite mine will also produce darker Rubellite crystals–when a mine happens to be producing. A pink Rubellite will generally be a more pure pink than other pink tourmaline gems. Almost all other types of pink tourmaline will have at least ever so slight to significant brownish overtones and have the possibility of being very clean to flawless. So it’s a choice of color vs. clarity. So far color has won—Rubellite has always been more expensive than pink Tourmaline.

As we mentioned in the last post the darker color of Rubellite as compared with Emerald tends to obscure the inclusions so that many Rubellite gems do really show a lot of inclusions to the naked eye. As you can see in this post’s photo the lighter color does not cover the inclusions and they are quite readily visible.

We traveled to an Emerald mine in Brazil with a group of people we were leading on a gem and mineral tour. The scene was straight out of a western in the 1850’s USA. A temporary “town” was set up along a rugged dirt road complete with bars, restaurants and general stores. Moto-cross motorcycles and 4 wheel-drive pickups had replaced horses and dark visqueen plastic replaced canvas to create tents but the people and their activities remained the same. Claims for miners were right next to each other. Many claims were in the little canyon we visited. With Emeralds being so valuable guns were everywhere and a bad accompaniment to the liquor sold in the bars. The day after our visit there was a shooting. No wonder that in Colombia there is a saying that the color of Emerald is red.
Where in the world is Emerald?
Emerald is a rare stone, especially in a good quality. However the following list is a list of places emerald has been found at one time or another. The extent of this list may qualify emerald as the rarest stone found in the most places. A good conundrum!
*Africa: Egypt, Ethiopia, Madagascar, Mozambique, Namibia, Nigeria, Somalia, South Africa, Zambia, and Zimbabwe
*Asia: Afghanistan, Cambodia, China, India, Kazakhstan, Pakistan, and Russia
*Australia
*Europe: Austria, Bulgaria, France, Germany, Italy, Norway, Spain, and Switzerland
*South America: Brazil, Colombia
*North America: United States and Canada