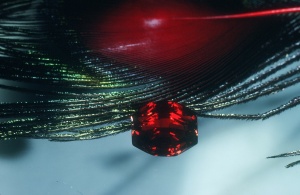 A number of our established clients know about spinel. Spinel is a relatively unknown gem. It has been unknown at least partly because it is very rare. It is chemically related to corundum (ruby/sapphire) in that spinel and corundum both have aluminum as a major component. In corundum is largely aluminum while spinel has both magnesium and aluminum in it. Due to its rarity spinel can be quite expensive. Due to a lot of writing about spinel in the last 10 years people’s awareness of spinel is greater than ever driving up spinel prices even more. Even back in the 1980’s large red spinels could reach prices in the thousands of dollars per-carat. One example of that is the gem in the photo. The gem in the photo is a little over 12 carats. That gem came through our hands back in the mid-1980’s and at the time was worth about $3,000-per-carat. You can only imagine how much it is worth now!!!
Over the past years and especially over the past decade much has been written about spinel so there is at least some awareness of the gem. When we were first in the business spinel was only known to come from Sri-Lanka and Southeast Asia—found amongst the ruby and sapphire deposits. Since that time some wonderful gems have come from East Africa and the Pamir mountains in Central Asia—a mountain range in confluence with the Himalayas.