Those born in June are lucky to have their choice of three birthstones: Alexandrite, Pearl and Moonstone. This year, we’d like to focus on Alexandrite… the most rare of all the birthstones.

Alexandrite is a variety of the mineral Chrysoberyl. Chrysoberyl is beryllium aluminate. This by itself is very rare. As a practical test of this rarity I was given an open purchase order from a gem dealer customer of mine back in the 1980s. The basic assignment was this: “find me as many pieces of Chrysoberyl over 8 carats (cut) and I will buy all you can supply.” This order was for the so-called “common” Chrysoberyl which ranges from a gold to a honey to a greenish gold color. This seemed like an easy assignment since I was going on a trip to Brazil anyway… so off I went.

As it turned out I never spent so much time or traveled so many miles by car in Brazil for so few stones in the 30+ years I’ve been going to Brazil. All these years later it is a funny remembrance. Even “common” Chrysoberyl is hard to find and extremely rare.

As stated above, common Chrysoberyl is an aluminate of beryllium, and occurrences of aluminum and beryllium together are very rare to find. To make matters incredibly more difficult, the recipe for Alexandrite includes the addition of chromium. As we wrote about in last month’s blog on Emerald, chromium is comparatively scarce. Thus the conditions for chromium to coincide with the already difficult to find beryllium aluminate combination are almost impossible. And that is why Alexandrite is incredibly rare.

The Magic of Chromium

The addition of chromium to Chrysoberyl has a profound effect on the appearance of the gem. As we mentioned regarding Emerald, chromium creates the unique green color for which Emerald is noted. Chromium is also the coloring agent in the case of Ruby. You might be tempted to think of chromium as a “magic ingredient” for the coloring of gems. Well, hold on to your hat, as the saying goes… In the case of Alexandrite, chromium creates a color that ranges from green in daylight to either red or purple in artificial light (depending on what type of lightbulb it’s exposed to).

The issue is the color temperature of the light striking the Alexandrite gemstone. The bluish light generally found in daylight creates the green look in Alexandrite. A more yellowish light such as found in old fashioned light bulbs or candlelight generates the reddish to purplish phase in Alexandrite. And all of this magic is courtesy of chromium. What fun!!! 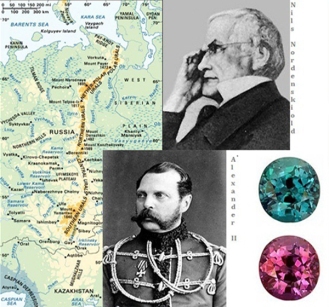 A Little History about Alexandrite

The name “Alexandrite” is due to the gem being named after Tsar Alexander II of Russia. The first deposit of Alexandrite was found in the Ural Mountains of Russia in the 1830s, reportedly in an area noted for Emerald mining. Given that Emerald was being mined, we already had beryllium and chromium in the neighborhood. With candlelight being the source of artificial light in those days, the color change was easily noticed—there were no neon, L.E.D. or fluorescent lights in those days to confuse the issue of color change.

A number of authors state that the colors Red and Green are the colors of the Imperial Russian Guard and that in turn this gave Alexandrite, which turns from Red to Green, its start towards being named after the young Emperor: Alexander II. In any case the Alexander II must have liked the association with the gem since he obviously made no attempt to curtail the use of the name. Freedom of speech and freedom of the press were not notable aspects of Imperial Russia. 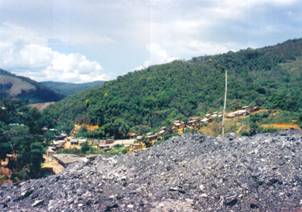 Relatively recent finds of Alexandrite include Russia, Tanzania, India, Ceylon and Brazil. The most attractive Alexandrite gems, in my opinion, have been the stones from Nova Era, Brazil (pictured at right). Nova Era stones tend to have a more distinct color change and each of the color phases is more attractive than is displayed by gems from other locations. The Nova Era discovery took place nearby to Emerald mines mimicking the original discovery in Russia. I was lucky enough to be in Brazil in 1987 during the Nova Era discovery and it was so exciting it was almost beyond belief. This was the first time in anybody’s memory that large Alexandrite gems were available in good quantity and at comparatively reasonable prices. It was a fine and crazy time.

For many of the past 40 years the biggest, most ardent market for Alexandrite has been Japan, followed by Europe. However, during that same 40 year period gem collectors from the USA and many other parts of Asia have come under the spell of Alexandrite.