To be born in November and to know that your birthstone is the long loved Topaz creates a certain pleasure. This special gem with its varying colors is my birthstone, so I can speak from knowledge.

As young travelers to Brazil, John and I were some of the first gem dealers to bring back Imperial Topaz in larger wholesale quantities. I remember vividly our first encounter with a large parcel of gem Imperial Topaz rough and thinking “what a marvelous, passionate color it is.”  Of course when buying gems, showing enthusiasm is not permitted (i.e., poker face!) and I remember how difficult it was to curb my enthusiasm. This is the emotion that came from seeing this rich red orange color in gloriously large natural crystals.

The range of color in Topaz is great and so the birthstone can satisfy each November baby’s taste. From a light golden yellow color to a rich orange, red orange, a deep red and yes even a pink, Topaz is indeed a treasure. Of course there is also Blue Topaz in many color varieties as well for those who love blue.

Perhaps it was my travels to Brazil that forged my love for the Imperial Topaz as a personal favorite. The color of the Brazilian earth where it is found seems to mimic the color of the gems themselves. I also have a special love for pink Topaz with its slightly lavender overtones.

Even Pink Topaz comes in a variety of colors. The Rose Topaz and Diamond tiara of Princess Marie of Wurttemberg (1857-1882) (shown at right) boasts a warmer deep pink color. The parure of lavender pink Topaz in the Swedish Royal collection has large pear shaped, cushion and oval Pink Topaz in a pendant, earrings, stomacher and brooch. Queen Silvia wore the set to her daughter Crown Princess Victoria’s wedding ceremony.  These large Pink Topaz gems are now quite rare and when auctioned fetch enormous prices. Christie’s has had several Pink Topaz auction items over the years having “belonged to a Lady”. 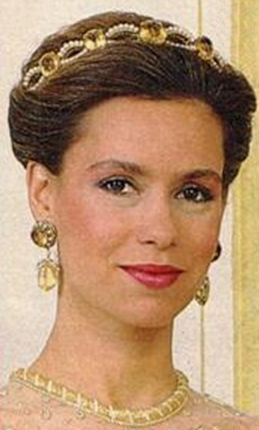 More traditionally we find that the yellow and orange topaz has been represented as the color of Topaz for Novembers’ birthstone. The lore of yellow and orange Topaz is thought to mean friendship and the ability to strengthen the wearers’ capacity to give and receive love. The Grand Duke Henri of Luxembourg gifted his wife Grand Duchess Maria Teresa with a yellow Topaz Tiara (shown in a newspaper clipping at left).

As John mentioned above, Citrine is a replacement gem for November because it is a similar color and less expensive. The unique color selection in Topaz would be worth saving up for though in my book! It has a dreamy luster. The rare pink color of Topaz is often times not considered an official birthstone color. This thinking is changing as more consumers understand the variety of colors each gem can have.  Not only for royals, women find pink Topaz, like pink Diamond, to be an exciting new option for their jewelry collections.

So as you enjoy falls’ richness of color and warm hues of oranges and golden-yellows, remember it is fitting for the birthstone of November to be Topaz.