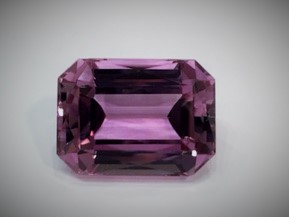 Kunzite was first discovered in the USA by George Kunz who, amongst other things, traveled around the USA examining mining sites and described minerals that had not been previously known. Kunzite was unique at the time based on its color. The mineral spodumene had previously been discovered but not the pink/lavender variety. Of course since that time good quantities have been found notably in Brazil and Afghanistan. As with most pegmatite minerals quantities of kunzite available in the market can vary wildly according to mining production. One of the best analogies to understand mining economics of minerals like kunzite, tourmaline and aquamarine exists in casinos. Mining these minerals is similar in many ways to putting money into a slot machine. Miners start with a certain amount of capital and keep putting money into the project. They may or may not hit a jackpot before their capital runs out. Sometimes a miner will give up and the next miner into the same mine will hit the jackpot. Note the gem in the photo. This gem is a wonderful example of cut and color in kunzite. The piece is 50.50 carats and is very nicely cut.