As a personal favorite, Aquamarine is high on our gemstone list. John and I have acquired and designed, respectively, many incredible Aquamarines for collectors throughout the years. Its remarkable beauty has won over so many that it became the alternate birthstone for March.

John and I have always had a fascination and direct connection with Aquamarine.   Traveling to Brazil for 35 + years has brought us to the Aquamarine mines directly. Thousands of carats of fine Aquamarine have passed through our hands to find their way into major collections.

In our book “Gem Chronicles: The Early Years” we share some of our experiences at Aquamarine mines. At one mine John was too tall to navigate the narrow space of the mine and I volunteered to step in for the experience. It was thrilling to dig in the tunnel/cave for Aquamarine in the flickering light. Here is an excerpt from our book about a famous Aquamarine discovery.

“Aquamarine crystals are often found only a few feet under the earth. Part of their attraction is their accessibility and the promise of a quick and easy find. A miner friend of ours once uncovered a huge and beautiful Aquamarine crystal that turned out to be worth some $2 million in U.S. dollars back then. We have no idea what it would be worth in today’s market. He invited us, along with a few of our Brazilian friends, to his fazenda, or ranch, to view the stone. The day was especially bright and beautiful as we sat on the veranda sipping cool drinks. Then, with great ceremony, our host ushered us into the room where he kept the specimen. Lying on a table, against a background of a hand-made lace cloth, was the biggest Aquamarine crystal rough we had ever seen. The original crystal weighed about 28 kilos (62 lbs). The foot of the crystal had broken off cleanly and the two pieces weighed about four kilos and 24 kilos respectively (8.8 lbs. and 52.8 lbs. each).

[Note: this gem is a different stone and larger than the one mentioned above]

The bigger piece was about two and a half feet long. It was an intense blue, not pale, not greenish, but a pure deep clear blue that testified to its value. In size, color and clarity, it was the absolute best. The crystal was not stream worn from an alluvial deposit. The crystal faces were shiny, crisp and intact. The stone looked like a giant, faceted gem-faceted by Mother Earth. We can never forget the pride on the owners’ face as he showed off his magnificent gem.”

Aquamarine became the definitive birthstone for March after a list was circulated by Jewelers of America Association in 1912 in order to help promote birthstone jewelry to customers. It is also the astrological gem for Pisces and Scorpio!

Aquamarine was also admired and acquired in ancient times. As early as 1377 William Langland mentions in “The Vision Concerning Piers and Plowman” the use of Aquamarine as an antidote to poison. During these times the use of poison was prevalent throughout Europe. In Roman times Aquamarine was carved with the likeness of a frog in hopes that an enemy could be reconciled to friendship. Also because of its’ delightful pure blue color many Romans believed the stone absorbed young love! A young bridegroom often gave an aquamarine as a morning gift after the consummation of their marriage. Aquamarine was worn to rekindle the love of married couples. 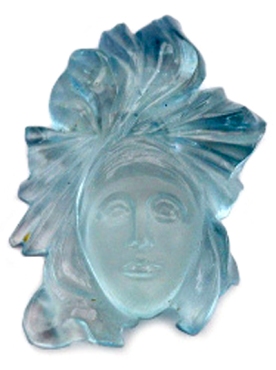 The Greeks knew of Aquamarine as the gem they took to sea to ensure safe passage and a talisman (example at right) to carry them across stormy seas. These talismans often worn by the sailors had likenesses of Neptune who ruled the seas. Many believed that Aquamarine originated from the treasure of mermaids. Aquamarine was also used as the symbol for energetic youth and happiness by other cultures throughout history. In its use as a talisman Aquamarine was worn as jewelry and not pulverized.

In 1906 Alice Roosevelt Longworth (daughter of Theodore Roosevelt) was presented with a heart-shaped Aquamarine by Vice President William Howard Taft as a wedding gift… very appropriate given its history of symbolizing enduring love and happiness. 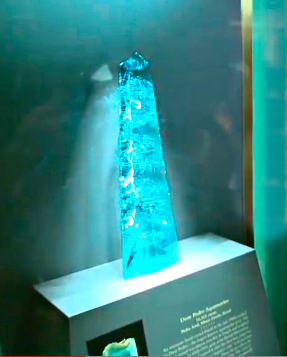 In 1910 a Brazilian Aquamarine crystal weighing 243 pounds was discovered. Its incredible transparency made this 19 inches long crystal a gem cutters dream. The British Museum of Natural History displays a flawless sea green Aquamarine that weighs 879.5 carats. The Los Angeles County Gem and Mineral Collection is a must see for all gems, including Aquamarine, from all over the World. The American Museum of Natural History boasts a 271 carat Russian Aquamarine, a 144.5 carat Brazilian emerald cut Aquamarine, and a Sri Lankan 335 carat Aquamarine. In 2012, the Smithsonian added the Dom Pedro Aquamarine (pictured just above) to its collection, effectively upstaging the Hope Diamond in visitor popularity. 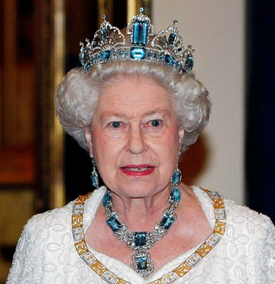 Some of the finest Aquamarine exists now in Royal jewelry. From the Queen Elizabeth II Coronation Necklace and earrings (presented by the President and People of Brazil) and later in 1958 an additional gift by Brazil of a matching brooch and bracelet, to the Duchess of Kent’s’ Fouquet Aquamarine, diamond and pearl tiara, royal jewelry has been well represented by fine Aquamarine. Princess Diana wore a large Aquamarine ring with diamonds along with Aquamarine and diamond earrings. Aquamarine of fine quality found its way into the current and past Royal houses of Russia, Sweden, Spain, and other European nations.

The allure and lore of Aquamarine is compelling. If you have not yet experienced its delightful true blue color and clarity, I hope your birthday is in March. Happiness awaits you.