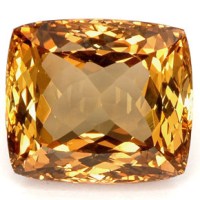 Topaz is truly a fantastic birthstone. The trouble with topaz is that everybody knows about topaz but very few people know the correct facts about topaz. This blog post is John and Laura Ramsey’s best attempt to correct that.

There is so much bad information out amongst the public regarding topaz that it is hard to know where to begin. The need for a birthstone with Fall colors is undoubtedly why topaz was chosen for November. While it is the best of choices for color and beauty, it is a less fortunate choice for availability.

True topaz in the color spectrum we all associate with Fall currently comes only from a very small mining district in Brazil. The availability of the material is comparatively low and the price is comparatively high. In the USA most people are completely unaware of true Imperial Topaz—the legitimate birthstone for November.

Imperial Topaz got its name from a deposit of gems found in Imperial Russia. It has been said that many of these gems found their way to the royalty of Russia and got the sobriquet “Imperial Topaz” from that association. Whether from a lack of quantity at the mine or from the political issues following the 1917 Russian revolution gems from the Russian source have not been generally available for decades.

My good fortune was to begin traveling and buying gems at the source quite early in my career. In addition starting out as a gem cutter helped me know gems more intimately than people who had been in the business decades longer than I had. Travelling to Brazil in 1978 I was lucky enough to find big productions of many gems including Imperial Topaz. As it turns out buying Imperial Topaz is a complicated issue but good introductions from a Brazilian friend along with a lot of gem knowledge made for comparatively smooth sailing. Big wholesale accounts bought large quantities of Imperial topaz from me right away since I brought in higher quality gems than other wholesalers brought to the party at that time.

So, what is it that people have been told and what is it that people have been sold? Years ago, here in the USA, a lot of smoky quartz was sold and called smoky topaz and sold as such. Smoky quartz is a logical (somewhat) substitution for true topaz. It has Fall colors, is inexpensive by comparison, and is readily available. It has taken most of my 38 years in the business, however, for the true students of gemology to eradicate the misnomer: Smoky Topaz.

Another member of the quartz group of gems has also been sold as a replacement for Imperial Topaz. That gem is Citrine. Citrine is the color variant of quartz which covers a spectrum from pale straw yellow, yellow, yellow orange, orangey gold, orangey red and even a fairly pure red. Most of the citrine that makes it to the market in the USA is in the middle of this spectrum. Quartz that finds its way into citrine for the jewelry market currently comes mostly from Brazil but also recently from Africa. From time to time Citrine has also been mislabeled as being Topaz. 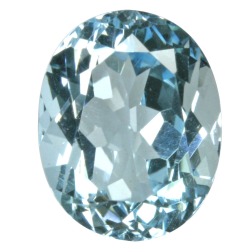 Well as it turns out otherwise colorless topaz can become blue due to eons of exposure to natural background radiation. Topaz from some areas seems to be more susceptible to the radiation and is more likely to turn blue. When I was first in the business I cut some blue topaz that was from Texas. Also at that time there were notable mineral specimens from Rhodesia (Currently Zimbabwe) which were the most vibrant blue yet seen. The color was natural the stones came out of the earth naturally sky blue.

Close to the same time I was cutting blue topaz from natural sources there were people experimenting with coloring of topaz with man-made sources of radiation. The man-made sources of radiation had much more energy in a short period of time than the natural sources and the resulting gems were a much more marked blue than the naturally colored stones—and there was a virtually unlimited supply of the source material—colorless topaz.

Well the beautiful color of the newly available gem made it an instant hit with the public all over the world but also added confusion to the November birthstone. People who wanted a topaz birthstone but who also preferred blue to the fall colors had a new choice. Jewelers who wanted a new affordable topaz for their customers had something new to offer the November babies—all good developments but also confusing to the consumer from time to time.

Just so you know, the US government has promulgated strict guidelines ensuring the safety of blue topaz to protect the consumer.

All of the gems that one way or another may be used as the November birthstone are beautiful and have justification for their use. Simply enjoy whichever stone you buy, knowing what it is.