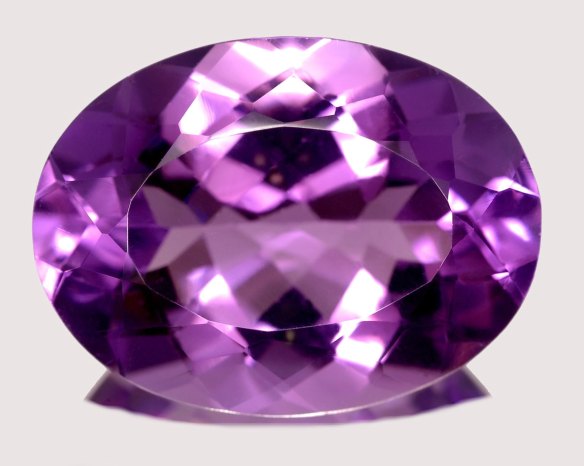 In past blogs about birthstones we have been talking about gems that have their gemstone “label” in common with their mineral names. Gems like Garnet, Topaz, and Tourmaline are also the mineral name. In contrast, Amethyst is a color name for quartz, which is a mineral. Amethyst is the quartz in its purple color.

If quartz itself were a birthstone we would be talking about all of the foregoing colors. But amethyst is plenty wonderful all by itself…

Speaking of science amethyst is known as silicon dioxide or SiO2, which if you remember our blog on garnet, is the basis for all “silicate” minerals. A small sampling of silicates include: topaz, the garnet group, tourmaline, and beryl (aquamarine, Morganite and emerald).

Truly, you will never know how many colors of purple there are until you work with amethyst on a serious wholesale level:

There are other amethyst mines in South America but the detail is overwhelming. We’re just giving you an idea of how big an issue “amethyst” is.

For those of us who like to wave the Red, White, and Blue there is a deposit of amethyst in Arizona known as the Four-Peaks Mine. Material from Four-Peaks has great color—rivaling any of the best amethyst from anywhere. However, the mine is tight-fisted with its production and the mine is reputed to be at over 7,000 ft. in altitude and remote in addition. Four-Peaks amethyst is by and large a collector’s item for those people who collect gems by location.

Africa is well known for optimally colored amethyst which comes from Zambia. Other African sources are reputed to produce or to have produced as well. However it is the Zambian source that is noted for truly fine color. Clarity can be an issue with Zambian material though.

Years ago Siberia produced what was at the time the world standard for fine colored amethyst. That source however is either not producing or not producing enough material to be economically important. But then again, Siberia is dotted with diamond mines… some minor consolation. 🙂