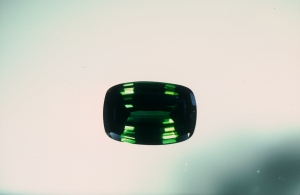 We’ve shown a lot of garnet photos over the past few weeks. One of our favorite garnets is Tsavorite which many Gems At Large aficionados know is named after Tsavo National Park in Kenya. We’ve been in Kenya buying rough Tsavorite as early as 1977—directly from the mine owners. I remember cutting some of my first experiences cutting Tsavorite go back even further to as early as 1974—not that long after its original discovery. Commercial mining of Tsavorite is reported to have begun only in 1971.
What a beautiful color of green we get to see in Tsavorite. Tsavorite is a color variety of grossular garnet—which is a calcium rich garnet. Initially gemologists assumed that the green color was caused by chromium as is the green color in Emerald and Demantoid garnet. Oops. It turned out that it is vanadium that gives Tsavorite its color.