The Powerhouse Museum in Sydney, Australia is hosting a showing of notable jewelry worn by their famous actors in films.

Amongst other items on display is the most expensive piece of jewelry ever made specifically for a movie: the “Satine” necklace worn by Nicole Kidman in Moulin Rouge.

Other pieces include a stunning diamond brooch worn by Cate Blanchett to the Oscars, and a star-studded ring worn by world-renowned fashion designer Catherine Martin.

Having gems and jewelry on display at museums is a worldwide phenomenon. Of course if you’re visiting down under be on the lookout for displays of opal–the gem that made Australia famous. The last statement my opinion solely. But what else would a gem aficionado say? 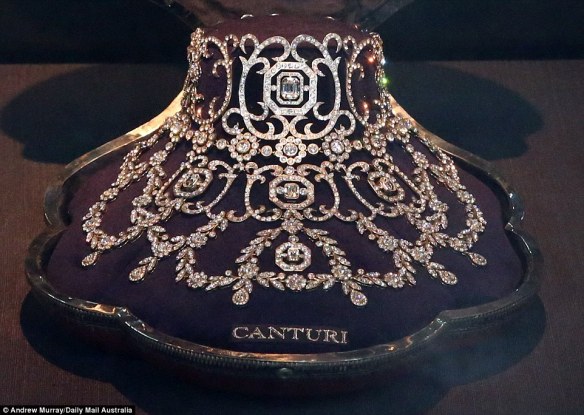 The photo we’ve included in this posting is a good example of a really great sapphire. What makes is so beautiful and appreciated the world around? First of all there is what it is not. It is not so pale a color that we would say “who cares?” Secondly, the photo shows a stone that is not so dark that we would say “who cares?” What we are showing in the photo is a “Goldilocks

” sapphire that is “just right” when it comes to depth of color. Not too dark, not to light. Next we have a stone that is not hampered by a lot of eye visible inclusions. The gem in the photo is relatively “clean” and flaw free. The combination of a just right color and good clarity give us the opportunity of seeing nice reflections off of the back facets while we are looking down into the stone from the top. The gem in the photo is relatively well cut and that is another reason we’re getting some nice reflections off the back facets. Color, clarity and cut…3 out of the 4 “C’s”. The only thing left is the size (weight in carats). Well, we’ll leave that to the imagination this time….Is it 1 carat, 5 carats, 50 carats? Might as well dream………

Europe is all abuzz comparing the two young royals Princess Kate and the recently crowned queen of Spain the former Letizia Ortiz Rocasolano. Queen Letizia married Felipe VI of Spain in 2004 and was a princess until June 19, 2014. On that date her spouse’s parents abdicated in favor of the younger couple. Suddenly Letizia has access to the crown jewels of Spain and has been wearing tiaras amongst other fine jewels. The Euro tabloids have fastened on the two relatively young royals and is always showing them in tiaras. While the two ladies have a 10 year difference in age they both photograph well and show jewelry to its best advantage.
Chances are the two are so far removed by geography that comparisons and competitions are the last thing on their mind. In any case the crown jewels of Great Britain are miles ahead of the crown jewels of any other country. Convenient ownership of the right colonies at the right time gave Britain the edge. From Sri Lanka came great sapphires. From South Africa came the world’s largest collection of large fine diamonds. India contributed emeralds.
According to sources some of the jewels owned by the Spanish royal family were sold while they were in exile from 1931 to 1968. Jewels have often come in handy as a form of portable wealth for many centuries. 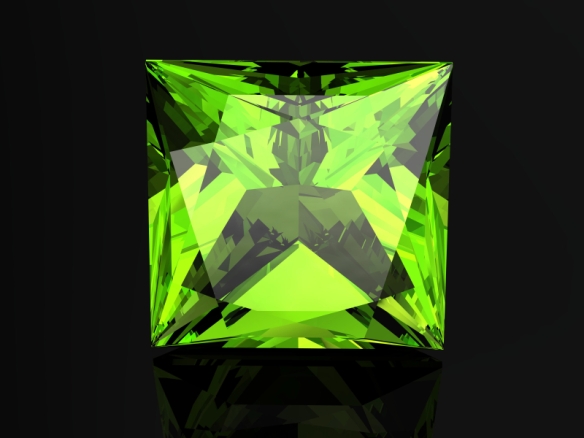 August babies have a lot better birthstone than they may have imagined. Ten cool facts that they may not know about peridot.
1. Cleopatra’s famous emeralds may have in fact been peridot.
a. The island of Zabargad in the Red Sea off of Egypt is an ancient source for peridot.
2. Zabargad Island is also known as Topazios Island and St. John’s Island.
3. Peridot comes from several sources around the world—Burma (a.k.a. Myanmar), China, Afghanistan, Pakistan and San Carlos Reservation, Globe Arizona USA!!!
4. While peridot comes from a number of sources, reliable sources producing large fine quality gems remains elusive. Want a lot of small peridot gems—no problem. Want a lot of large fine peridot gems—take a ticket and stand in line.
5. Peridot crystals from Zabargad were easy to identify as from that source in that many o them were exposed to sand storms through the ages and displayed a sand-blasted surface.
6. Great color in peridot is also the perfect spring green—green and gold slammed together.
7. Peridot comes from deep in the earth’s mantle and is brought up to the surface in volcanic activity.
8. Peridot also comes from outer space. Meteorites have been discovered with beautiful peridot inside.
9. Peridot only comes in green as opposed to many gems which come in a veritable rainbow of colors. Such versatile gems include: diamond, sapphire, garnet and of course the rainbow gem—tourmaline.
10. Peridot is one of John Ramsey’s favorite gems to cut and polish.

Just recently an important Burmese ruby and diamond ring was sold at Christie’s in Hong Kong. While the diamonds surrounding the ruby were nothing to discount all accounts of the sale referred to the ruby as if it were all by itself in the ring.

END_OF_DOCUMENT_TOKEN_TO_BE_REPLACED

Fitting into the theme of world records being set for gems and jewelry the spring auction late in April by Sotheby’s saw a new per-carat record for a sapphire. The gem is recorded as being a 28+ carat Kashmir gem. According to the auction house the proceeds of the sale are going to charity. With a total price exceeding $5 million USD the per-carat price was over $180,000.
In the lore of colored gemstones Kashmir sapphire is the bench mark. The purity of the blue in Kashmir stones is indeed stunning. Traditionally the Kashmir stones are said to have slight haze but that seems to vary from piece to piece. After spending months maybe years of my life in Thailand (ruby/sapphire central for the world) and seeing gem after gem I would have to say that a fine Burmese sapphire can be every bit as lovely. Some traditionalists may want to disagree but that is just fine. To a true lover of gems they are all like a family—each member is wonderful on their own and for their own unique characteristics.
For instance, about 10 years ago or perhaps a few more there were some fabulous blue sapphires from Madagascar which were certified as untreated. Many of these gems were absolutely stunning. A great Ceylon stone is also beautiful. In fact many of the most famous sapphires are Ceylon stones residing in the important state collections of the world.

Ruby and all colors of Sapphire are simply different colors of the same mineral: Corundum. Hooray for Corundum—without you we would be missing a lot in the gem world.

Now, here is where it gets interesting. What happens in the gems that don’t know enough to fit squarely in one camp or another? Well, some Pink Sapphires get close to red and some Rubies have apparently had a brush with Clorox and come up a little pale to be considered “red.”

Some of the best fun we’ve had was in the late 90’s when we would buy some of the more pale Burmese Rubies that were cut a little chunky on the bottom in what they call a “mixed cut.” The mixed cut would have a heavy rounded bottom in an effort to conserve color. We would buy these, cut the bottom to a “brilliant” bottom pretty much like a diamond is cut, lose a bunch of color and have the prettiest, darkest hot pink sapphires we’ve ever seen.

Sometimes things that are between the lines of common definition are the best! 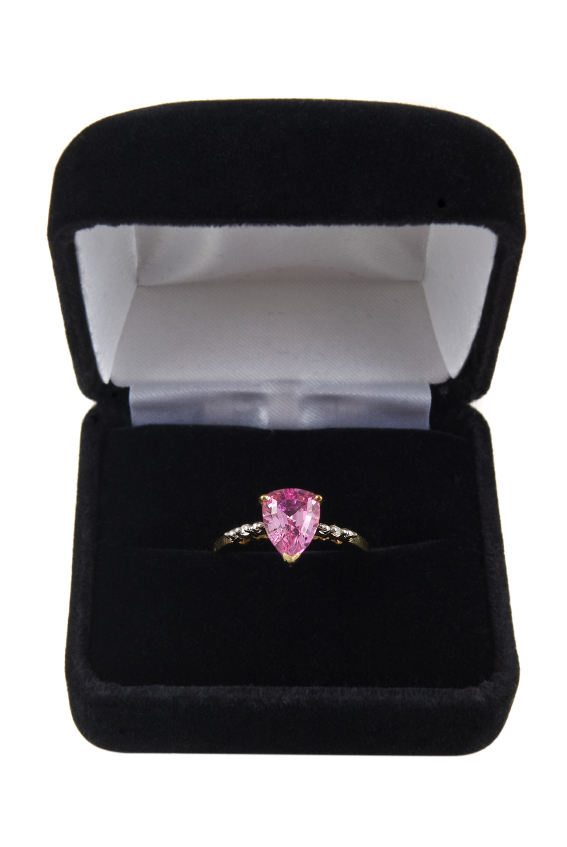 Most people are very familiar with the pearl as one the birthstones for June. Alexandrite and Moonstone are the other two gemstones. Pearl, with its variety of color and shapes, is an organic gem loved and treasured for centuries. It is said that the Romans built armies from the sale of a single pearl while poems abound about its transcendent beauty.

The pearl was selected as a birthstone for June by the American National Association of Jewelers in 1912. Not only can you select your favorite pearl as a birthstone, you can also receive a pearl for your 3rd, 12th and 30th wedding anniversaries. The allure of pearls is far reaching.

Pearl is considered to be organic since it is formed inside mollusks such as oysters and the mussel. An irritant, perhaps a bit of sand or a stone, can get inside the shell. Nacre is then secreted around this irritant creating a lustrous substance. Layers upon layers overlap to create an iridescent luster. A pearl can take up to 8 years to be created. Principal oyster beds are in The Persian Gulf, the Indian Ocean primarily along the coasts of Sri Lanka and India, as well as the Red Sea. Japanese pearls are found near the coast in salt water. Polynesia coasts and Australia produce cultured pearls.

Types of pearls are extensive ranging from the natural to cultured (when the irritant is placed by man inside the living oyster), to baroque, Biwa, blister, black, Freshwater pearls, seed and mabe pearls. China and Japan cultivate freshwater and cultured pearls. Freshwater pearls also occur in the rivers of Germany, Austria, Scotland, Ireland, France and the USA (Mississippi). Colors range from white and creams to pinks and iridescent black. 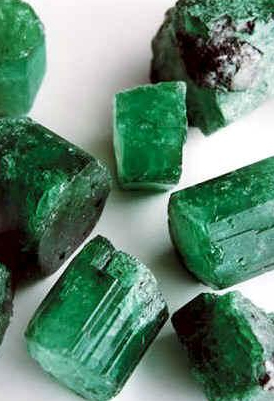 With emerald being the birthstone for May, it is always fun to get back into thinking of emerald green and the renewal of spring.

The appreciation of emerald goes back centuries. Holy scriptures of East Indian by the Vedas wrote in Sanskrit of emeralds and their promotion of good luck and good health.

While emeralds are appreciated the world around, certain cultures prize them more than others. As spring unfolds here in the Pacific Northwest it is easy to appreciate the color green and the gem world’s best known representative of green: the emerald.

Learn all about emeralds in one of our previous blog posts > 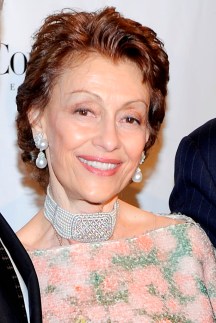 I wanted to write a blog post about a dear lady I was lucky enough to come to know: Evelyn Lauder, the visionary Founder and Chairman of the Breast Cancer Research Foundation (established in 1993).

John and I have been proud to donate some of our gemstones in jewelry over the years to help raise money for Breast Cancer Research. That is how I met Evelyn Lauder—daughter-in-law of the cosmetics giant Estee Lauder—in my hometown of New York City. We quickly discovered we had many things in common, including a love of photography, and both of us had written several books—Evelyn’s “An Eye for Beauty” was my favorite.